Mr. Wong is a 78-year-old male from mainland China who has been admied for rehabilitation following total hip replacement surgery. He has a poor appetite, has experienced weight loss, and has been unable to participate in physical therapy. Thus he is not meeting his goals for rehabilitation. No evidence exists to suggest an underlying disease process.

Ms. Faye, the nurse assigned to care for Mr. Wong, is interested in learning what might be going on with Mr. Wong to beer meet his treatment outcomes. Ms. Faye considers the possibility that he does not have adequate pain relief, which could affect his appetite and cause poor participation in physical therapy. She reviews his history to learn more about him. According the health history, Mr. Wong is a widower of 3 years; he has a son and daughter who live in distant cities. Mr. Wong emigrated from China at the age of 38 years and speaks only Cantonese. He has lived in an ethic neighborhood with other Chinese Americans and has worked as a short-order cook in a Chinese restaurant since arriving in the United States 40 years ago.

Ms. Faye arranges for Mr. Lee, a Cantonese translator who is also Chinese, to help her ask Mr. Wong a few questions. She first asks Mr. Wong if he is in pain. When he responds no, she follows with another question, asking him if he is depressed or anxious. Again, Mr. Wong responds no, that he is fine. During the interaction, Ms. Faye observes that Mr. Wong does not look at her or Mr. Lee, the translator.

After leaving the room, Ms. Faye expresses her frustration to Mr. Lee, mentioning how difficult it will be to help Mr. Wong when he will not communicate. Mr. Lee responds, “Elderly Chinese people believe that they must be stoic about pain and there is a stigma about talking about any mental health problems.” This explanation had not occurred to Ms. Faye, who then recognizes her approach may have been offensive and that she had failed to consider the underlying cultural differences beyond language.

Ms. Faye asks Mr. Lee to share more about traditional Chinese beliefs. She then asks Mr. Lee to help her ask Mr. Wong additional questions using a cultural assessment form as a guide. After gathering additional information from Mr. Wong and gaining additional insight from Mr. Lee, Ms. Faye incorporates strategies that include changes to how his food is prepared and served, changes in approaches to pain management, and involving Mr. Wong’s son and daughter in his care.

1. In what way does this case exemplify the concept of culture in the context of health care?

2. Referring to Fig. 4.2, what interrelated concepts are exemplified in this case? What additional concepts apply that are not included in Fig. 4.2? 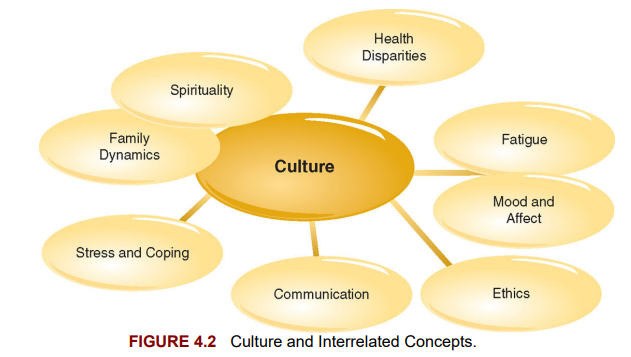