On July 4, 2006, Julie Thao, RN, an experienced obstetrics nurse with years of expertise worked an extended shift that ended at midnight, and she returned to duty at 7 a.m. on July 5. Shortly before noon on July 5, Thao made a lethal medication error while assigned as the primary nurse to a teenage patient who was admied to the birthing unit at St. Mary’s Hospital for induction of labor.34 On July 5, Thao spent almost an hour with the patient on admission explaining the birthing process and answering questions, with much of her focus on alleviating the patient’s anxiety. During that time, Thao failed to place an identification wristband on the patient’s wrist, in violation of hospital policy. Because the patient tested positive for group B Streptococcus, the physician ordered an antibiotic to be administered intravenously (IV) at 11:00 a.m. Anticipating that the patient would need an epidural during labor, Thao gathered epidural medications (bupivacaine and fentanyl) without a physician’s order, took these to the patient’s room, and placed them on the counter where the antibiotic was ready and waiting to be administered. At 11:30 a.m., Thao picked up the IV bag that she believed contained the antibiotic and began the infusion intravenously. However, Thao administered the IV bag containing the unordered epidural medication (which is supposed to be administered into the spine).

Almost immediately, the patient appeared to be seizing, and Thao stopped the infusion. Despite efforts to resuscitate the patient, Thao’s error resulted in the death of the patient, whose baby was saved by an emergency C-section at 12:20 p.m. Thao was terminated from her position at St. Mary’s Hospital, and the patient’s family filed a civil lawsuit against the hospital. The Wisconsin Board of Nursing suspended Thao’s license for 9 months, followed by a 2-year practice limitation with terms and conditions, including a requirement to make educational presentations to nurses or nursing students on the topic of preventing medication errors. A subsequent criminal complaint charged Thao with patient abuse and neglect causing great bodily harm, a felony that carried a penalty of imprisonment and a significant monetary fine.35 Thao’s alleged criminal conduct was characterized as “(1) failing to obtain a doctor’s order before introducing medication into the patient’s room, (2) not looking at the medication prior to administration, (3) failing to adhere to the 5 ‘rights’ of medication administration, and (4) failing to scan the barcodes on the medication as required.”36 Thao eventually received probation after pleading no contest to two criminal misdemeanors counts related to the unlawful dispensing and possession of the epidural medication.37

1. Consider Fig. 57.2. Which of the sources of law does this case represent?

2. Under what basis did the Wisconsin Board of Nursing have the authority to suspend Ms. Thao’s license and impose a 2-year practice limitation? 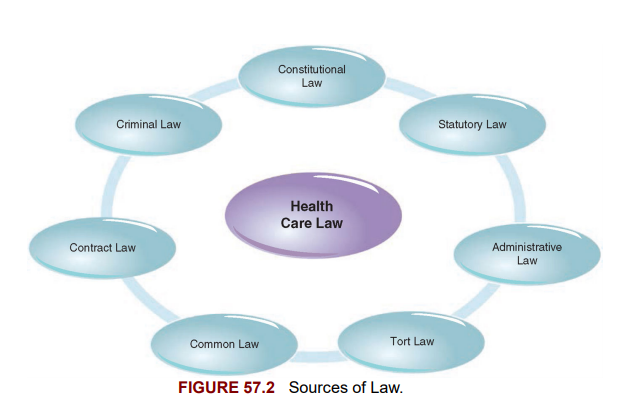