The system shown in Figure 12-45 is a waveform (function) generator. It uses four 256-point look-up tables in a 1-Kbyte ROM to store one cycle each of a sine wave (address 000–0FF), a positive slope ramp (address 100–1FF), a negative slope ramp (200–2FF), and a triangle wave (300–3FF). The phase relationship among the three output channels is controlled by the values initially loaded into the three counters. The critical timing parameters are tpd(ck-Q and OE–Q max), counters = 10 ns, latches = 5 ns, and tACC ROM = 20 ns. Study the diagram until you understand how it operates and then answer the following:

(a) In Figure 12-45, the three latches on the left perform a function that represents one of the basic building blocks of digital systems as presented in Chapter 9. Which function is it?

(b) The four latches that are fed by the ROM serve to implement another basic building block of digital systems. Which function is it?

(c) Why are the octal latches that feed the DACs necessary? (d) What number must be on the MOD 4 function select counter to produce each of the following waveforms: triangle; sine; negative ramp; positive ramp? 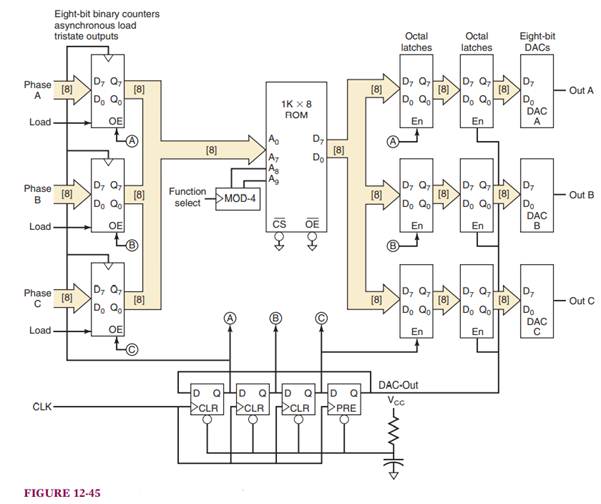